I really need to get back into doing this once a week because I can never remember the beginning of two weeks ago!

So week 5 & 6. Well.... I got a couple more things done but new random things got in the way. Not really in the way but they took precedent over my queue work.

The first thing was a hat for my uncle. He's technically my great-uncle, but still. He's in chemo right now and this is the second time he's gone through it. The doctors assured him that he's going to lose his hair this time so I made him a hat to keep his noggin warm!

According to my aunt, his favourite colour is green. I used KP WOTA Chunky in "Rolling Hills" for the green variegated and Navy for the blue bands. I thought that just a green hat would be boring and I'm really happy with the way it turned out. That's going in the mail tomorrow with a card.

The second thing was just yarn. Yes, yarn. A few weeks ago I pulled out my stash in an effort to reorganize it and completely reconstruct my Ravelry inventory. Great in theory....time-sucking in practice. After many entries to the online database, I still haven't made it all the way through and I have a LOT more to go. The good news is that I'm discovering some yarns that I had completely forgotten I even had. Things like:

I did manage to get TWO more things done for #MakeMyQueue though:

Top, Scrap Happy hat is exactly as it sounds. All I did was use nicer scraps from my basket. The top is Malabrigo, then KP WOTA worsted, Jojo Land Rhythm and finally MadelineTosh Vintage. I actually used them all up but the hat's a little smaller than I'd like. It's also not exceedingly warm so right now, with snow falling, it's kind of useless.

By way of an opposite, Bicycle Wheels is made with Lion Brand Thick n' Quick. I'd never used this yarn, ever, so I figured what the hell. Well....I'm just kind of ok with this. It's far to large, sits weird on my head and is kind of heavy. I may frog it but truth be told, I don't care that much. I used a coupon for the yarn so it was only $4 and it's part acrylic anyway. Meh. Also, I don't know why this pattern is called Bicycle Wheels. I guess because the purl loops look like tires? Not sure. But whatever, on to the next project!!

So that's it for now. I've started my 13th project from my queue which I'm calling "Hex-Tris" for obvious reasons:

This is such a fun pattern that I'm addicted to making these little #hexies , a hashtag that +Sabrina Benton and I are using and trying to trend...

The beginning of Week 3 was a bit of a mess. Between New Year's and Vic getting sick, knitting happened while at the hospital waiting for his tests. I worked mostly on Bolting as I really wanted to get that done. Now that it is, I can move forward with Project: Make My Queue.


Then, as Vic's illness began to subside, I got the flu. After a trip to the ER, I got the meds I needed and slowly recovered. Of course, being sick basically sucks the life out of you and I had NO drive to knit or crochet at all. I did cast on a project but after the first 100 stitch chain, I put it down and never picked it back up. LOL

So Week 3 was a bust...but we move on. Week 4 was a LOT more productive since I took a couple extra days from work and focused on some of my goals. Yes, MakeMyQueue was important but I also have an unruly stash that needed to be reorganized. This task started with the purge of the closet to the living room floor. I needed to visually take in how much yarn I have.

Next was deleting my entire stash from Ravelry and starting over. Skein by skein, new pictures, listings, details were added to the online database. Now, with just over 70 entries, I've gotten a bit in...but I have a LOOONG way to go. Until I'm done, the floor looks like a ball pit of yarn!

The rest of Week 4 shifted back to my queue. Now that I've seen some of the forgotten yarns, I was able to use up some that had previously no purpose. The results? Two more projects off the queue.

First was Ovate (http://www.ravelry.com/patterns/library/ovate)which called for Malabrigo Rasta which I did not have. I substituted 4 skeins of Cascade Nikki (held double) to make this: 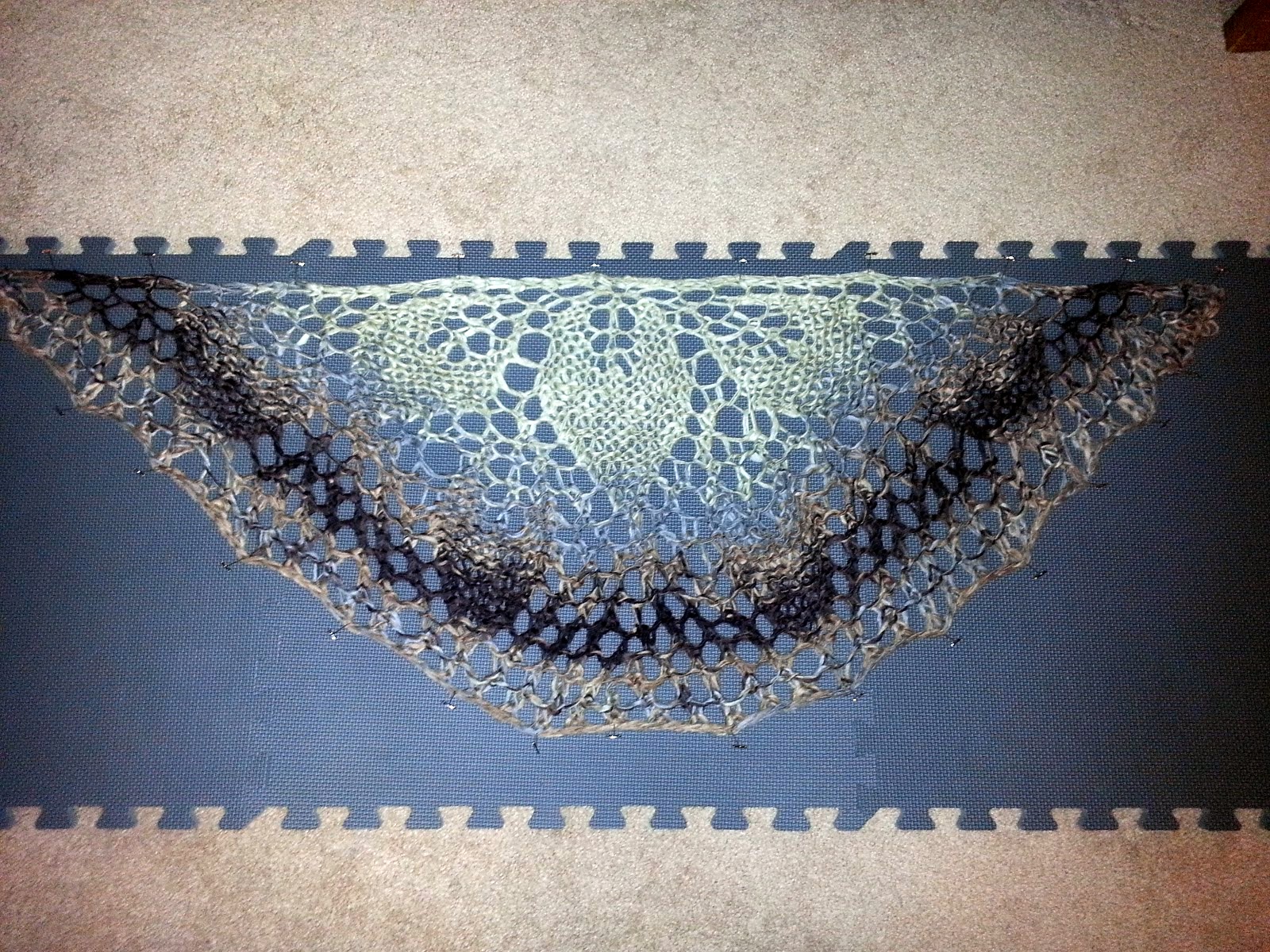 I really like the pooling that happened even with two strands held together! Never thought it would come out so well.

Then, just finished, is the Nala Slouchy (http://www.ravelry.com/patterns/library/the-nala-slouchy): 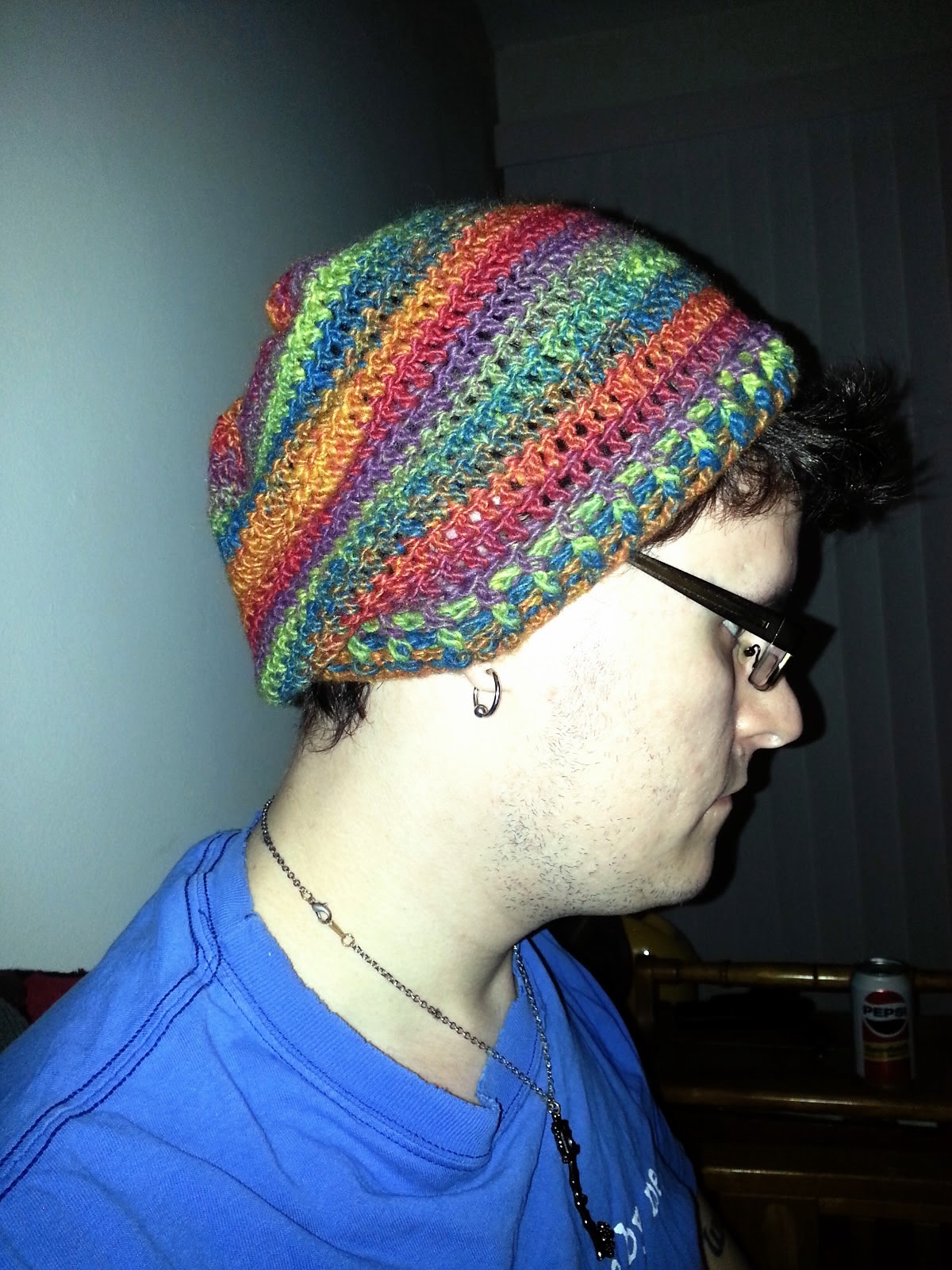 While this was an easy pattern, the band construction was terrible. Also, the pattern was written rather poorly and I had to add an extra 12 stitches at the beginning just to make it fit. I think I'm going to stick to top-down hats as they seem to fit better. I'll wear this tomorrow as it's going to be a bit warmer so I won't need something super heavy but it is not my favourite hat. The yarn is Bernat Mosaic and for an acrylic, it's super soft and look at the colours!!! Noro much?!

Well that's it for now! I've started Chadwick and Metalouse but I'm not gung-ho about them just yet. Eventually I'll get them done. For now I'm having too much fun eliminating things from the list!!