This past weekend was Memorial Day. Not that you didn't already know that, but what you didn't know is that this was only the 2ND Memorial Day that I have ever NOT worked! Since last March, I've had a "real" job and thus get some paid holidays. It's a wonderful feeling waking up on some Mondays and thinking to myself "I don't have anywhere to go"!!

Brief history: I was in the retail world from the age of 14 to 28. It had been a long road but being fired from JoAnn Fabrics released me from that world and I have found a great deal more learning than working in my current position. Oh, that and paid vacations and holidays!!

Ok, enough of that.
Saturday was kind of crap. Vic and I walked to our new local diner for breakfast but by the time we got home, the humidity was WAY too high and we had to turn on the AC. So instead of really doing anything, I got a chance to work on my sweater! 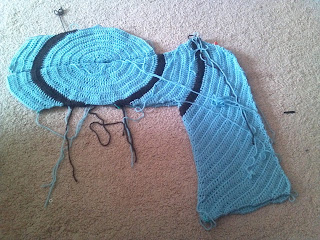 This picture isn't even accurate anymore as I've already added the other brown stripes and have started on the body of it too. So like I said, Saturday was crap.

Sunday...WHOA Sunday! One of my besties came down from Lowell and she joined Vic and I at Dim Sum! After, we found a beautiful spot at Starbucks and with no humidity and temps only in the 70's we knit in the dappled light for 2 hours!

Then, I dropped Sara off to her house and tripped over to Walmart to grab some other stuff. Vic took a walk around town and I was able to hangout on the balcony and crochet some more! 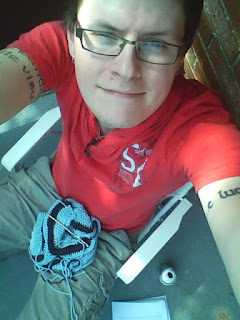 Hmm... well that was pretty much all I did for the rest of Saturday. Vic came home from his walk and he got a couple of movies from Newbury, "The Grey" and "Red Tails". I didn't watch the latter but the former was pretty good. Very deep with a fantastic ending!

TODAY was the freebie day. Woke up and made breakfast for the two of us: candied kielbasa and omelets.
Then we took a ride to Nut Island. Holy shit what a beautiful place!!! Very small parking lot but lots of walking paths; a pier to fish from, beach to walk on and beautiful views of the city and islands.

Well after our dose of sea and salt, we needed fish!! Found Henry's Seafood and Pizza, little place run by Greeks and fantastic! Headed home for some R&R and now here I sit. Blogging away and getting ready to pick up my sweater again. Vic's out for a "guy's night" so I get some alone and quiet. He he he.. So I'm off to do just that!

Wow. Haven't blogged in a bit so I figured this was the perfect opportunity. It's a "less" busy day at work so I actually get a chance to breathe and type this thing out!

I have a TON of projects going (not really but there's a few). I have a tendency to make myself "overwhelmed" and then steadily work through all the projects to completion and produce a stack of finished products. I know, I'm weird.

So in no particular order:

Been working on this one for a while but it's been in hibernation. I'm thinking this will be my vacation project.

This is in Noviembre Malabrigo. Love this knit but I've been working on other things. Still, it's my goal to finish this sooner rather than later.

This is kind of a pride of mine as this will be for my mom for Christmas. I'm well into the pattern now and taking my time. This needs to come out perfect! It's about 4' wide, the length is TBD.

Done in superwash merino (instead of cotton), this is my most recent project. I really, really love the way this is coming out. I had to change/combine different sections of directions to account for my long arms and skinny torso.  The blue point is basically at my waist line then I need to fill in the triangle to make it squared off.  I'll be adding a couple rows of brown at the bottom just for kicks and possibly making this a cardigan with a zipper instead of making it a pullover. We'll see. I still need to make the entire other half so I have a bit to go. But, this has all been done in less than a week! I started last Thursday! Rocket crochet!! HAHA.

Ok...whew...that's what's going on right now. I've got washcloths on standby for when I don't feel like working on any of the above. Then I have days where no needlework gets done at all and I read. Still relaxing either way.