So for anyone doubting what I was doing yesterday, it was the New York Sheep and Wool Festival. Up at 5am, to Framingham by 6:30am, bus ride to the gate in Rhinebeck, NY took about 3.5 hours. The traffic getting into the damn festival took more than 45 minutes....but it was well worth it. The whole thing was quite overwhelming once you got through the gates! 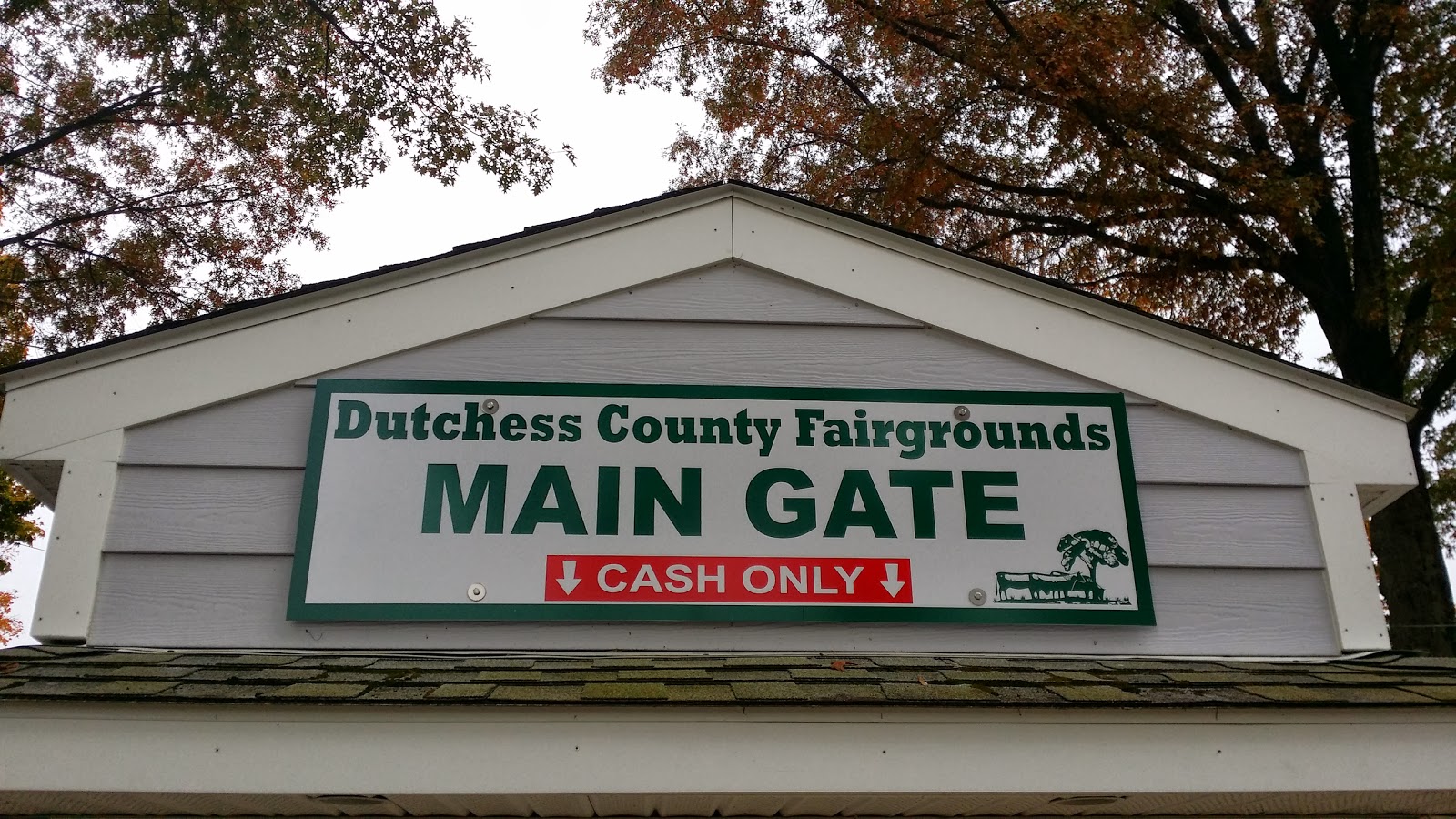 We didn't have to stop here, thankfully, since we already had tickets. Really great to have paid in advance and just be able to walk in the park!

At the gate, +Sara Marks and I got our guide book and we started mapping out where we were going.
And these little guys were right by the entrance... 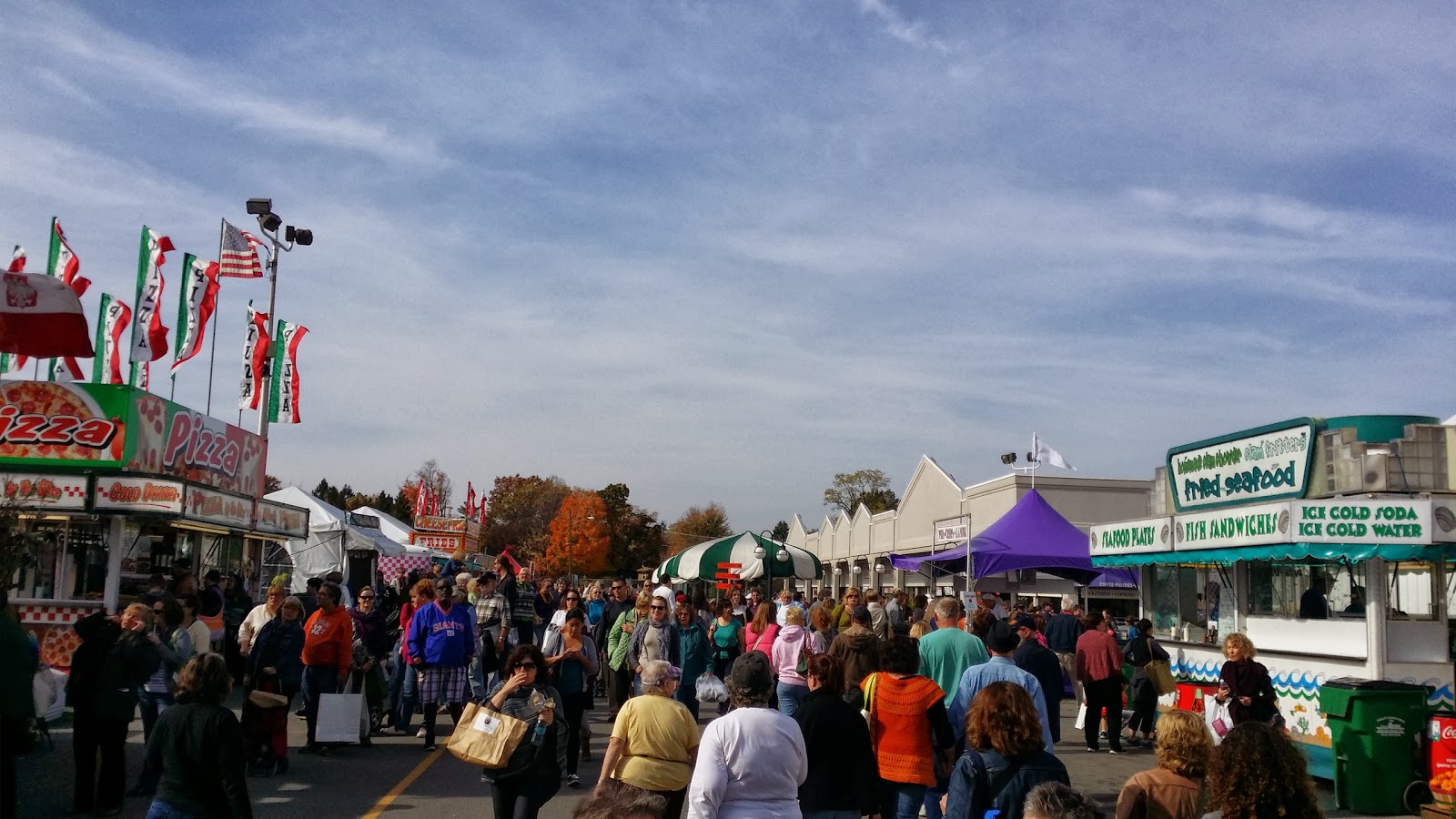 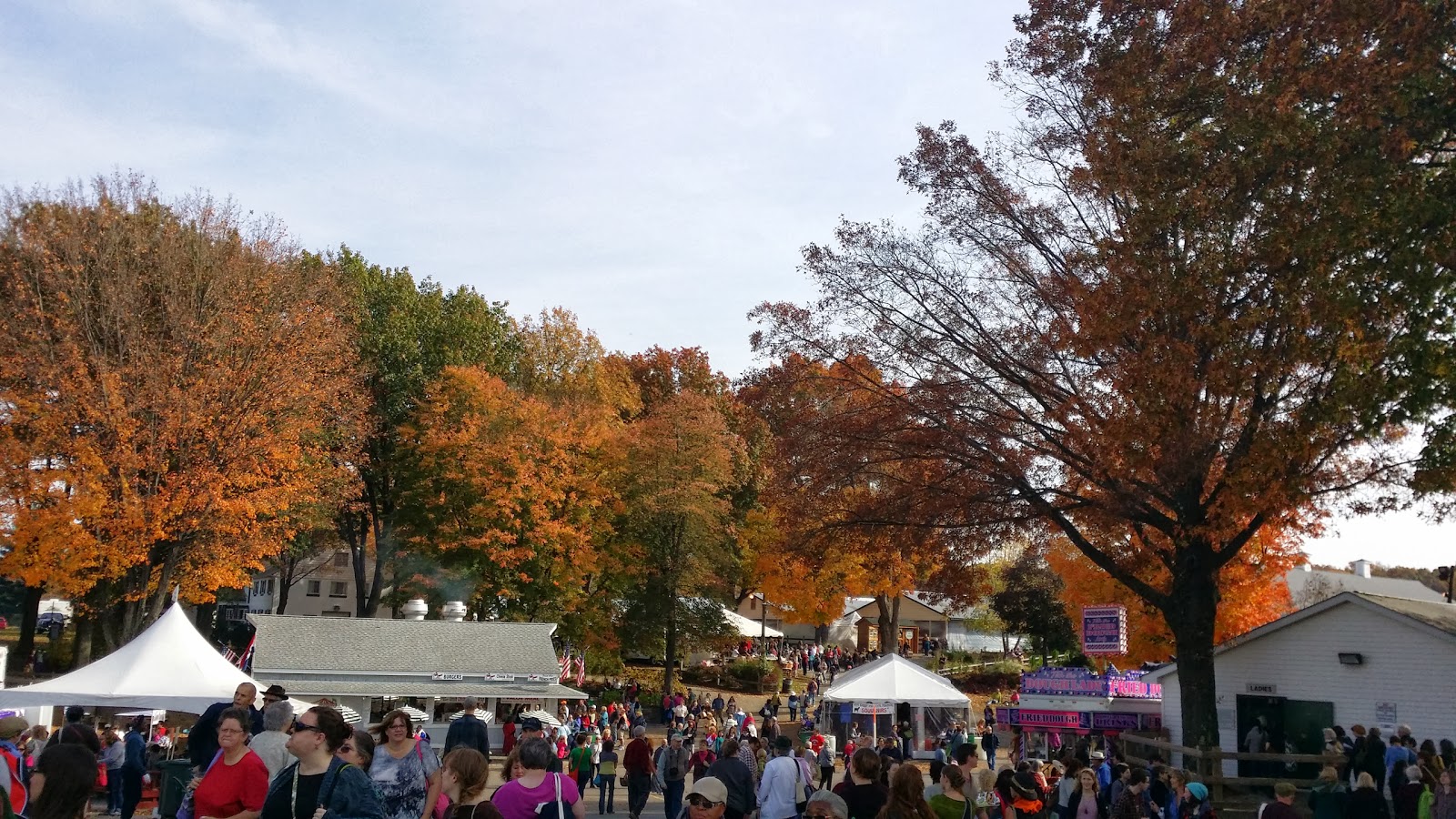 SO MANY PEOPLE!!! This was only at 11am or so. It was a madhouse!! +Sara Marks needed a bite to eat so we took a break for that. While she was in line, I was knitting. What was I knitting? I was working on the Hurricane Hat I started Friday night.


Ok, so I worked on this from the onset of the trip to the gates. Between chatting and resting, the rest stop and meeting people, I was still able to nearly finish it before we got there. When Sara was in line, I got to the decrease part... so I just finished it.

So then we went yarn shopping!! The first place we went was building C to pickup +Mori Gryphon 's Shark Week socks. I didn't take a picture of that but they're adorable. After that was the souvenir tent for +Erin W 's mug and memorabilia. I got a project bag with the logo on it and Sara got one, too.

From there is was our mission to actually get yarn since up to this point we hadn't yet! For the next several hours it was one gasp after another. Rows and rows of vendors with all kinds of fibers and yarns. The smells of amazing food wafting around. Fried dough! There was just so much to SEE!!

Throughout the day I met up with #Fiberatti from all over: +Petra Cosgrove-Tremblay , +Elizabeth Ives , +Hugh Tauerner , +Heather Zoppetti , +Stephanie D'Annibale !! I met the crew of Ravelry.com and they signed my official Ravelry bag!! (Total fanboy moment, btw) And you can see me on the far left of the group shot from the Ravelry meetup:

+Sara Marks were wiped out from all the walking and browsing and at 5pm, sat and waited for the bus. It was time to head back to reality, drunk on yarn.

SO HERE'S THE HAUL::

And finally, the yarn that put me over budget:

My first trip to Rhinebeck was nearly perfect. The only thing missing was +Zen Alpaca to make the DDA complete...but next year!! I met a woman named Anise from Maryland that said we need to go to the Maryland Sheep & Wool festival, too. Plus the New England one is in November.... Dear god, the yarn.

So that's it! I'm still tired. I need more coffee. And I need to plan my projects!!!

This month has been rather insane with projects...but that's not going to stop me!! 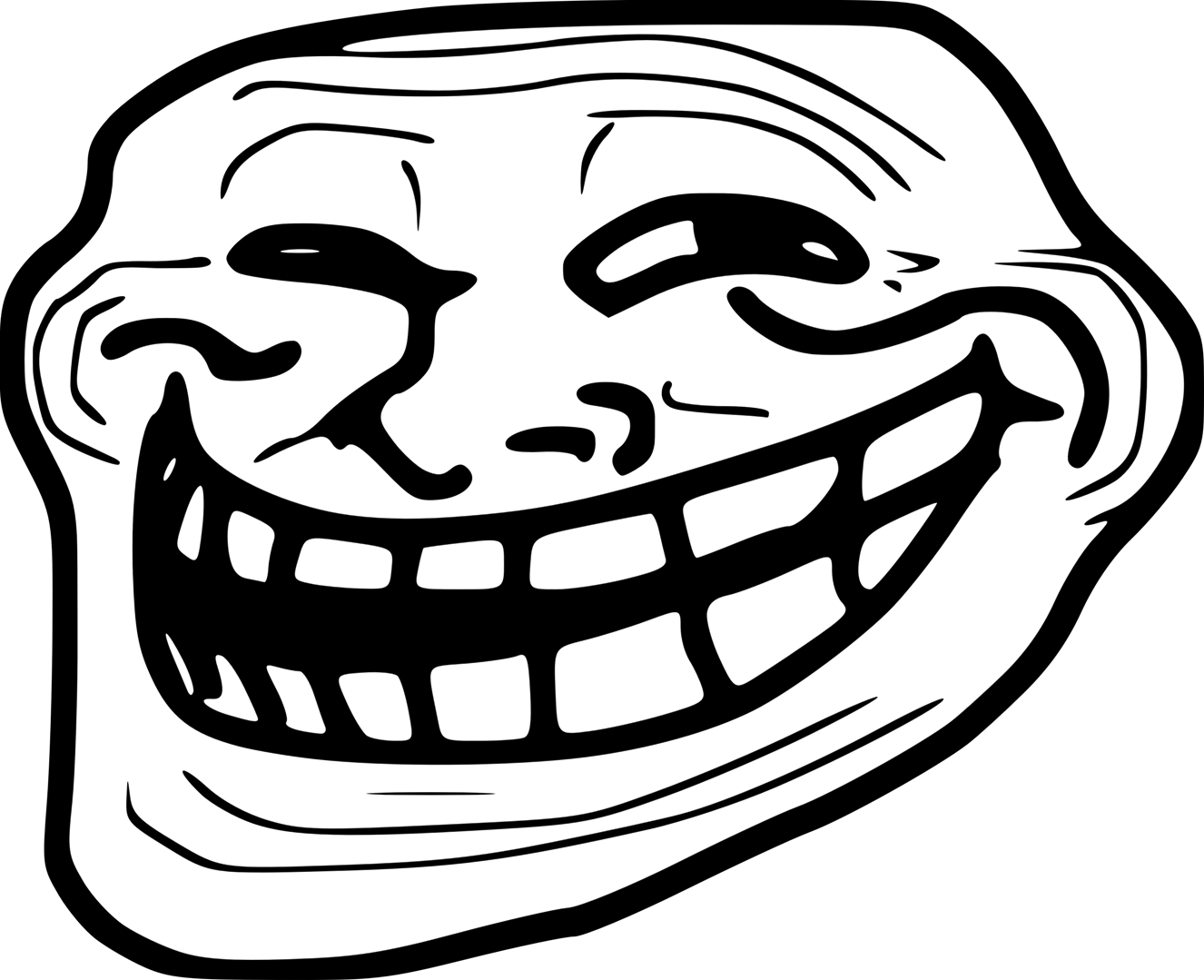 /Begin RANT
What IS going to stop me is a particular Raveler who is taking far too great an interest in every single person's project. This person has been trolling the 114 projects that are participating in the MKAL and making sure no one has posted pictures. I know this because she messaged me directly asking me to remove the picture. I simply responded with 'removed' and left it at that. I'm not happy about my decision but it's Ravelry and I don't want issues.

A few minutes later I got another message. Just a quick 'Thank you' in reply to my previous message. I thought, ok, fine. Done. But I was also thinking that I would probably put my photo back up. Here's the thing.. yes, I know it's a Mystery knit a long, but you've given us a pattern already. Moreover, you gave us a CHART of that pattern. AND the instructions tell you to use that chart over and over until you get to 56"! So... the pattern is basically known. The only part you're saving is the stupid 4" edging which, frankly, I don't care. If you want it to be some big secret, don't give a chart. That's the only way to make it unknown.

After the last email I assumed that was it. Eventually I'd put my photo up anyway (not sharing to the group, mind you) and finish the project. Not so. This Raveler took it upon herself to message me again giving a dramatic reason why I was to take my photo down and then give me advice about my colour choices and placement. Uh, really?! TROLOLOLOLOLOLOL! GO AWAY!

So, fuck you "stitchnerds", I'm all set. Project frogged, group unjoined. I don't feel that micromanaging over a hundred people and their projects is right. If Stephen West doesn't care, you shouldn't either.
/Rant

Ok, so today I'm working on the #SWMKAL13 since the last clue came in last night!! I got the first three rows done and cannot wait for the bind off. He gave us three that he thought we'd like but I don't really like any of them, so I'll be using Jenny's super stretchy bind off instead.

I feel a little better...but the knowledge that I'm probably going to get messaged by her again is grating on me. I've deleted my own posts in her group but I don't know if she gets some kind of notification of that. Given her track record of trolling, I would imagine that she's going to go to my project page and see her's removed and wonder why. Gah.
Posted by Kobuu at 7:13 AM No comments:

KNIT ALL THE THINGS.

Ok, so this isn't  ...more like  ...Tripartite: need to cast on side #2Scallop Hat: Started last night, through one repeat of the pattern; needs 4 more and decreases.
Chadwick: This is for #ChadwickKAL and is getting cast on today...
#SWMKAL13: I still need to finish clue 3.... but it's getting shorter. I'm hoping maybe today, if I can hide out from work someplace..
Lonely Yarn MKAL: Really? I'm going to start another MKAL???? (DAMN YOU +Fiber Babble )

....NONE of that is crochet. You know, the craft where you can get shit done really fast? Yeah, that. Nope. All knitting. I'm running out of needles...

Oh wait, I did start Geoui. But I don't really like it as much as I thought I was going to. It's coming out a little too feminine and I already know it won't block out like I want either.


Ok, so...like I said in a comment on a post, I have STARTITIS. I just want to knit EVERYTHING and my fingers actually twitch at the thought of time with my needles. Crocheting right now just doesn't seem plausible. I've got #Rhinebeck coming up with +Sara Marks in October, too! Whew. Someone save me from myself..