song of the moment is the kill by 30 seconds to mars. they rock and i can't wait for new stuff. also, anyone into Anberlin needs to get to their fave music store. their new album is INSANELY good!! they redid their classic "feel good drag" and with the new production it's totally solid. i'm a little pissed they left tooth and nail for universal but hey, i guess it's the times. smaller companies left behind while the large ones suck up the talent. oh well. the plus side, one of my fave bands gets the monetary backing for some killer future productions!! can't wait guys!

now on to short circuit and trying futilly to get excel to work. ugh.
tootles.
Posted by Kobuu at 10:01 PM No comments:

yeah, so i tried using ms excel for the first time in a long time and failed to be able to get what i wanted done! oh well.

good thing i have the day off tomorrow. i'm pretty sure that christmas hasn't even started and i'm ready to kill almost everyone that comes in that god damn store. seriously. i think they were giving out retardedly stupid pills somewhere. i don't care whom i offend but i needed to vent.

now it's on to knitting!

tootles.
Posted by Kobuu at 5:32 PM No comments:

well so much for that

so i read that the us house didn't pass the $700 billion bail out. ok. so what? so wall street thugs don't get their bonuses. so the ceo's don't get their's either! who cares!? aside from them of course. i mean, the economy needs help but i don't think that was the way to do it.

maybe it's just my ignorance. i don't really know anything about economics. i can't even keep a check ledger. so who am i to say. i personally don't care about that whole thing. although, you guys wanna do another "stimulus package" i'm there! i could use another random $600 check. man, the first one went faster than i could have even imagined!!

of course that leaves us with a falling stock market which i guess affects everyone but i'm not so sure. i live in a pretty decently sized city. we, as townspeople, pay more attention to things like the price of gas and the cost of milk. there's no real push for the whole stock market thing. i haven't heard word one of this until i visited an old friend of mine. (not old as in i haven't seen her in a while, but old as in 81). she was talking about it with my grandfather and i and we just chatted. but it didn't stop me from driving 90-100mph on the highway through rush hour traffic. of course i was wasting gas...but it's down to $3.43! i figured, what the hell. sad though, i remember when i first started driving and it was only $0.86! that's inSANE!

i guess the only image that i have about the failing economy is the old woman who came to my service desk. she went through checkouts and forgot to use her $1 off coupon for a package of toilet paper. no prob. i fixed it. then she leaves and comes back 5 minutes later still miffed cuz the 2 for $10 sale didn't apply to her mega rolls but to the double rolls. well, she was determined to show how stupid i was until i showed her the wall where the doubles were and the wall where the megas were. bottom line, this woman was determined to save just a few dollars on TOILET PAPER!! and i have people bringing back clearance things for as little as $1.60! their favourite phraze is "every little bit helps"... yeah ok lady. well, how much gas did you use to lug yourself and your three rugrats here, the time and energy factor oh and you know you're not gonna get away with leaving without shopping and probably making yourself tired thereby justifying your stopping at mcdonald's cuz you don't want to go home and cook! WTF!

yeah. bail-out. water's leaking in, we don't have a paddle, rocks on either side and you're naked. i dunno.

tootles.
Posted by Kobuu at 8:31 PM No comments:

waste of and a stitch in time

you know, when you get to work at 11am and you have to be taught something by your manager which takes time and then you're told that you can only work 4 hours total because you're so close to overtime...then you go and do "work" for a mere 2 hours cuz that's all that's left...you feel kinda useless.

that and i pissed off someone important. ugh.

oh well. in other news i've completed two more hats and begun a new pair of socks. my only problem there is that i make it through one and have no desire to create the other. plus, i'm not following a pattern, i make it up as i go, so i usually run into logistic problems when i try new things (like changing needle sizes) or whatever...it's just one of those things. but i'm pluggin' along. can't wait for the knit-a-thon. 12 hours straight of knitting to raise money for my club so i can knit more for the homeless. i really feel like i'm becoming a part of something. back a few months ago, i decided it was time for me to go back to church. now, i'm not a religious guy. more spiritual than anything else...but i found that i was lacking in faith overall. it helped. i went to the unitarian universalist church and listened to the easter mass. it was great! i felt connected to something for the first time in a very long time. so i went for a couple of weeks and eventually felt better and better. as my life has moved on i've stopped going to church all over again. but that's ok. i feel that it's not necessary to go to a building where everyone says it's a church and this is where we worship. even as a unitarian church there is still the overtones of strict religious practices. i feel that my soul and body make up my temple/church and therefore i am my own religious place.

with all that i needed a way to feel like i was still part of this world. knitting has always brought me close to a lot of interesting people. hell, i held stitch and bitch nights in my college townhouse! im glad for this gift and i encourage anyone to try (i can teach you too!)

a little random and off topic but hey, it's a blog for christ's sakes. lol.
sleep now. tootles!
Posted by Kobuu at 11:12 PM No comments:

this is my latest hat 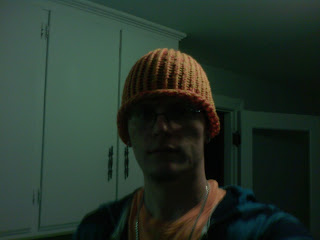 made with green nifty knitter ring and two strands of worsted weight yarn, one in golden yellow and one in "70's" orange. came out really cool. look for more. i take these with my phone so i'll be learning as i go. tootles.

so im going to try and keep this up. i work at kmart so it shouldn't be too hard...you know, there's tons of stories everywhere you just have to look. and not too hard either cuz i mean, well, take for instance the average mom. she's great around the house, does most of the shopping, but ends up being completely ignorant to the return policies of her favourite store. ok, so here's the scene. i, the customer service desk associate, have to greet everyone that comes in the door. enter the mom. she's got a friend in tow (as they do if not children) and she'd like to return some clothes. she tells me that she doesn't have the receipt but store credit will be fine. this, however, is not walmart and we do NOT take back everything. when i tell her that without the reciept she's not able to return the product she loses control and flips out. not a quiet one either...

when she simmers, the friend steps in and asks to speak to the manager. once informed that i am the front end manager, she's quiet. they want to know where it's posted about the policy, i point above my head to a GIANT BLUE AND WHITE SIGN. you can't miss it. first line "without a receipt, no refund will be given". funny huh? idiots.

in other news, i've perfected my knitting on the nifty knitter. i am officially a hat making machine and pride myself of that fact. working on another one now actually and prolly going to make a ton more all the way until the knit-a-thon. more on that later. for now my new hat is calling me so tootles.
Posted by Kobuu at 10:54 PM No comments: